Children arrested for trespassing while protesting at Jitney-Jungle.

Wouldn’t that be a crazy headline today? This is one of those articles that just sticks with me. I wonder about these children, about the others who were watching, about how the arrest took place, whether they were hurt, let go, spent time in jail, or what?

A  ten year old in 1965 would be 65 years old now. Most of our parents and grandparents lived in this time, and yet it’s treated as if it was hundreds of years ago. As if it’s ancient history, never to be discussed except as pure history, not compared to the now because “things are different now.”

They are different, but does that mean we’re done? I don’t think so. Not only that, the people who shouted racial slurs, or tried to intimidate Black people away from voting, or who fought to keep segregation going, they’re still here. Many are still working, still voting, still in positions of leadership, still influencing younger generations. Have they learned? Maybe in some ways. We have a new flag, right ? That’s a whole other topic, but at least we have it.

“Five Negro juveniles were arrested for trespassing Tuesday when the youngsters refused to stop picketing on the private grounds of a Jackson shopping center.

The owner of the Delta Mart Shopping Center property told a group of about 30 Negro youths and adults that he would have them arrested if they attempted to picket on the property.

Five youths, estimated at eight to 13 years old by police, began to march in front of a supermarket in the center. They carried signs which read, “Uncle Toms Shop Here” and KKK uses this store. The remainder of the group set on a bank just off the property and watched.

Deputy Chief J. L. Ray told the five pickets to move off or be arrested. They refused to move on, and were arrested and charged with trespassing.

Tuesday marked the fourth day of picketing at the center since Friday. The arrests were the first for trespassing at the shopping area which has a large volume of Negro business.

Picketing was spread to another shopping center Tuesday where about 25-30 persons displayed signs in front of the large grocery store located there.” 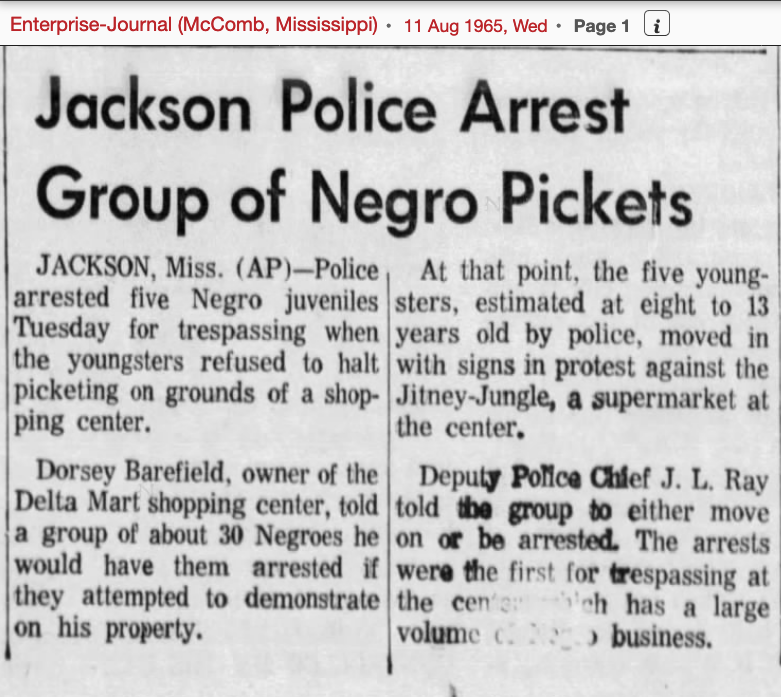 Police arrested five Negro juveniles Tuesday for trespassing when the youngsters refused to halt picketing on grounds of a shopping center.

Dorsey Barefield, owner of Delta Mart shopping center, told a group of about 30 Negroes he would have them arrested if they attempted to demonstrate on his property.

At that point, the five youngsters, estimated at eight to 13 years old by police, moved in with signs in protest against the Jitney-Jungle, a supermarket at the center.

Deputy Police Chief J. L. Ray told the group to either move on or be arrested. The arrests were the first for trespassing at the center which has a large volume of Negro business.”