Hidden History: The KKK, Rankin County, and the UDC

Imagine if we had a statue of these guys in the middle of Brandon, Mississippi: 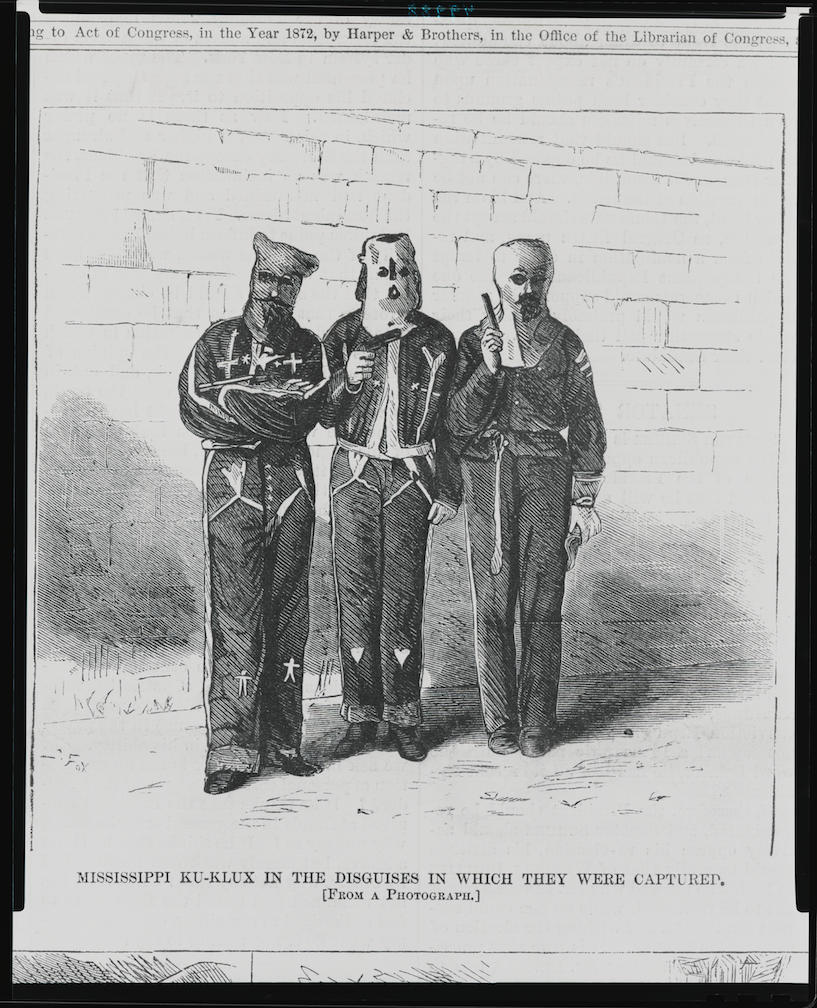 Mississippi Ku Klux Klan members in the disguises in which they were captured, 1872 (Library of Congress, Washington D.C.)

The people who raised the monument in Rankin County were mostly a mixture of former Ku Klux Klan members and sympathizers. The original Ku Klux Klan was largely made up of ex-Confederate soldiers.

I wish this mattered more than it seems to.

Don’t go on about how the Democrats were the KKK, the Democrats did this or that, etc to distance yourself from them while you revere and honor them in the middle of town and declare that “the South will rise again!” Case in point, this winner who kept driving by and revving his engine at September’s Unity Rally in Brandon: 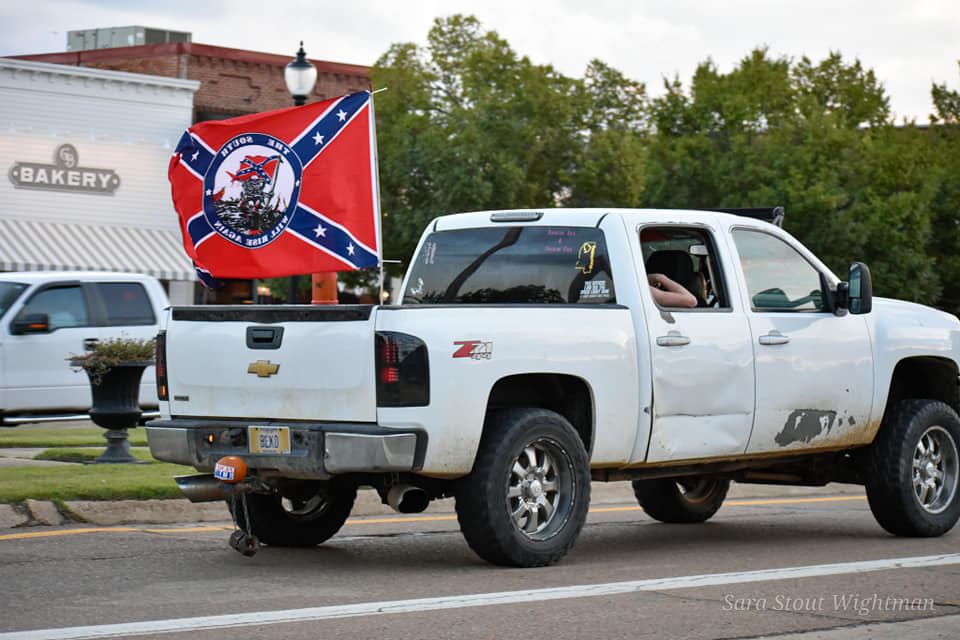 Time for a history lesson!

S. E. F. Rose (aka Laura Martin Rose), historian and eventual Mississippi president of the United Daughters of the Confederacy wrote a book called “The Ku Klux Klan, or the Invisible Empire” in 1912 as a form of KKK propaganda to sell and fund Confederate monuments. 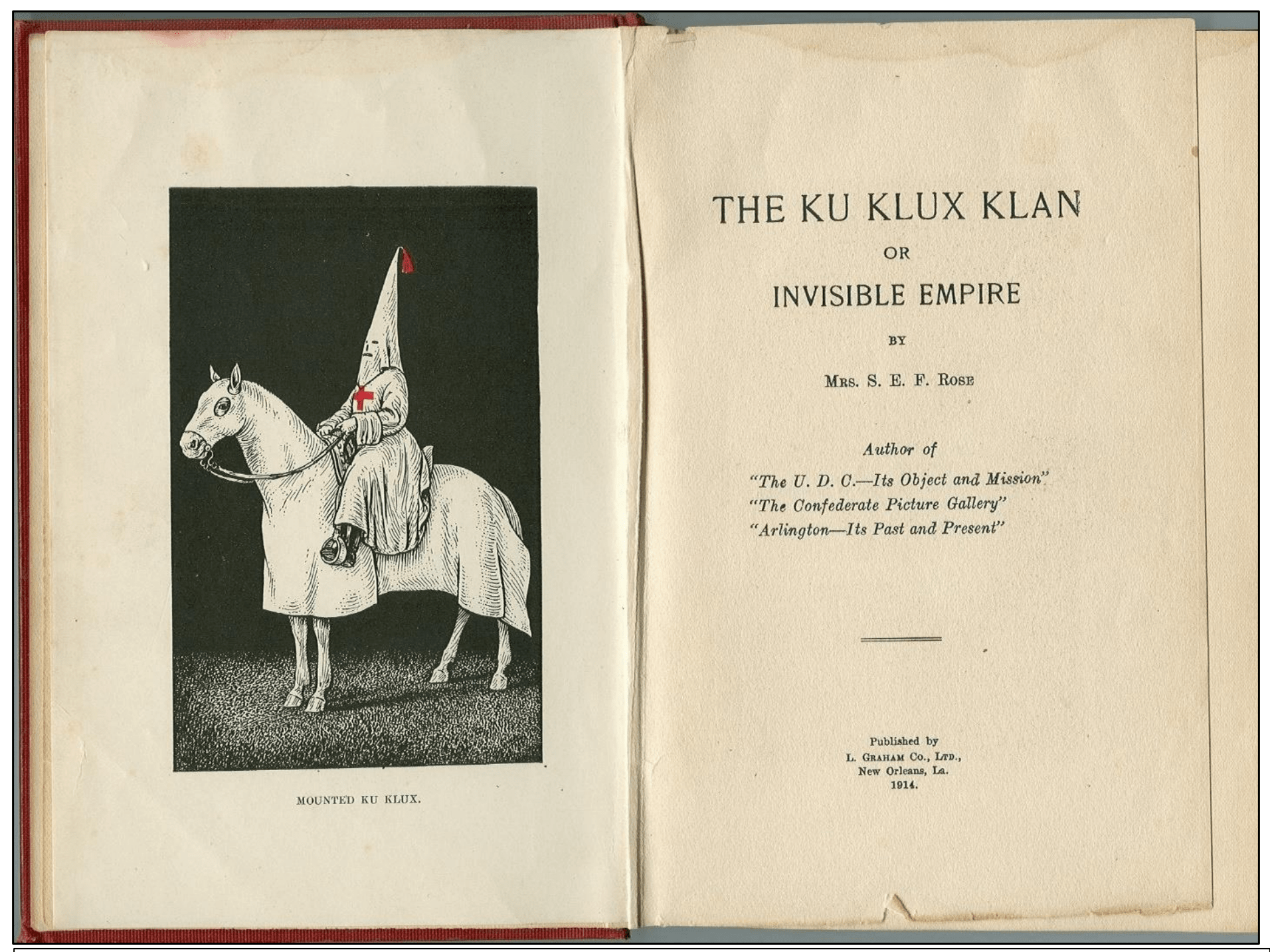 Mrs. Rose was was in the UDC with Daisy McLaurin Stevens.

Daisy Stevens was the president of the Mississippi division of the UDC. She was also the daughter of Anselm McLaurin, a former Mississippi governor. As an aside, both he and his daughter are currently buried in the cemetery where we are hoping to relocate the statue. 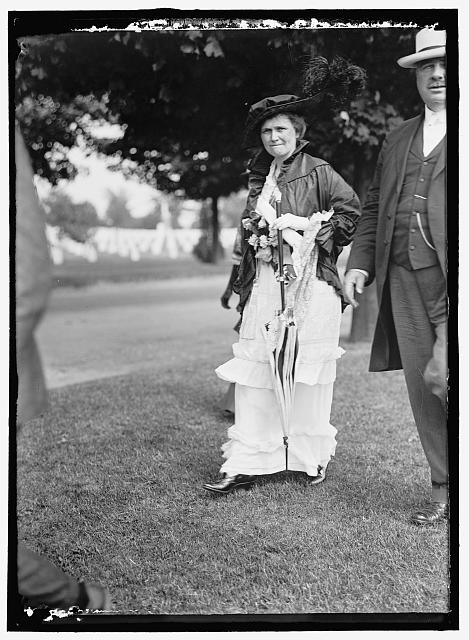 President of the UDC, Daisy Stevens, in 1914 at the Arlington National Cemetery (from the Library of Congress; Harris & Ewing, photographer)

Daisy Stevens was the Mississippi president of the UDC in 1907 at the time the Confederate monument was erected in Rankin County, so she was instrumental in its being brought to fruition.

Daisy Stevens’ speech at the commemoration of the Rankin County Confederate monument:

“The honorable Mayor has already accorded you a welcome with a ring so sincere, so true, that it needs no wordy repetition from myself to press upon you the gladness of our hearts in having you with us today.

The Commonwealth of Mississippi boasts a reputation for her generous hospitality, and the municipality of Brandon throws open to you her homes and hearts and buds you enter on this gala day with a spirit like unto that which gave to the Southern Confederacy such boys as wore the gray in the war between the States.

As president of the Mississippi Division of this grand organization I bespeak to you a message of love and good will. To no audience would I do it more lovingly than to this, composed of Veterans, Sons of Veterans, Daughters of the Confederacy and representative men and women of Rankin County.

Methinks I hear the echo of a bugle call and from the distant past I hear wafted to you in the seraphic voices of an invisible choir a faint chant of peace, peace, peace; nearer, nearer, nearer I hear it coming, and louder, louder, louder grows its thundering peal until we Daughters of the Confederacy, taking up the note bursts upon us like a thundering sound of nature’s great pipe organ, join in our welcome, welcome, welcome.

We are here to day to unveil this monument to the memory of our heroic dead. Is is our expression of love and veneration for them and the cause they knew to be right, wrought in stone and marble, crystallized, chaste and pure. Memory turns back to days of anxiety, of peril, of suffering and of sacrifice.

Inheriting from our Revolutionary forefathers a democratic aversion to all forms of oppression, the doctrine of State sovereignty uppermost in our minds we readily recall South Carolina’s initiative in her secession from the United States government. This very act of secession inaugurated a new epoch in international history and probably changed the destiny of the whole world. It gave to the Confederate States of America a soldiery embodying purest patriotism, exalted military genius and heroic virtue; a womanhood unequalled for beauty of face and character in the annals of the world. Always outnumbered and opposed by a foe abundantly supplied with food and ammunition, Southern bravery and skill had to supply the deficiency in numbers, and supplies.

Where in all American history can you find a man, a general comparable to Virginia’s son, Robert Edward Lee? None can you name, save the Father of our Country, George Washington. To the boys that made such men as the magnificent Johnson, the heroic Jackson and dauntless Gordon, we love to pay tribute. I need not cite to you a history of our uneven struggle, for any one of you veterans can take your grand baby upon your knee and weave a tale of war and battle more accurate in its telling than I could cull from all history of that period.

It has been said a people carves its own image in the monuments it rears. Not only then does Mississippi, but this whole Southland proudly consent that posterity shall judge us by the image of this private soldier we are here to unveil.”

Mrs. Rose was not a rogue writer who had a hobby of pushing Ku Klux Klan propaganda, separate from the UDC. The UDC revered the Ku Klux Klan, and they celebrated Mrs. Rose for her “teachings” about them over the years. 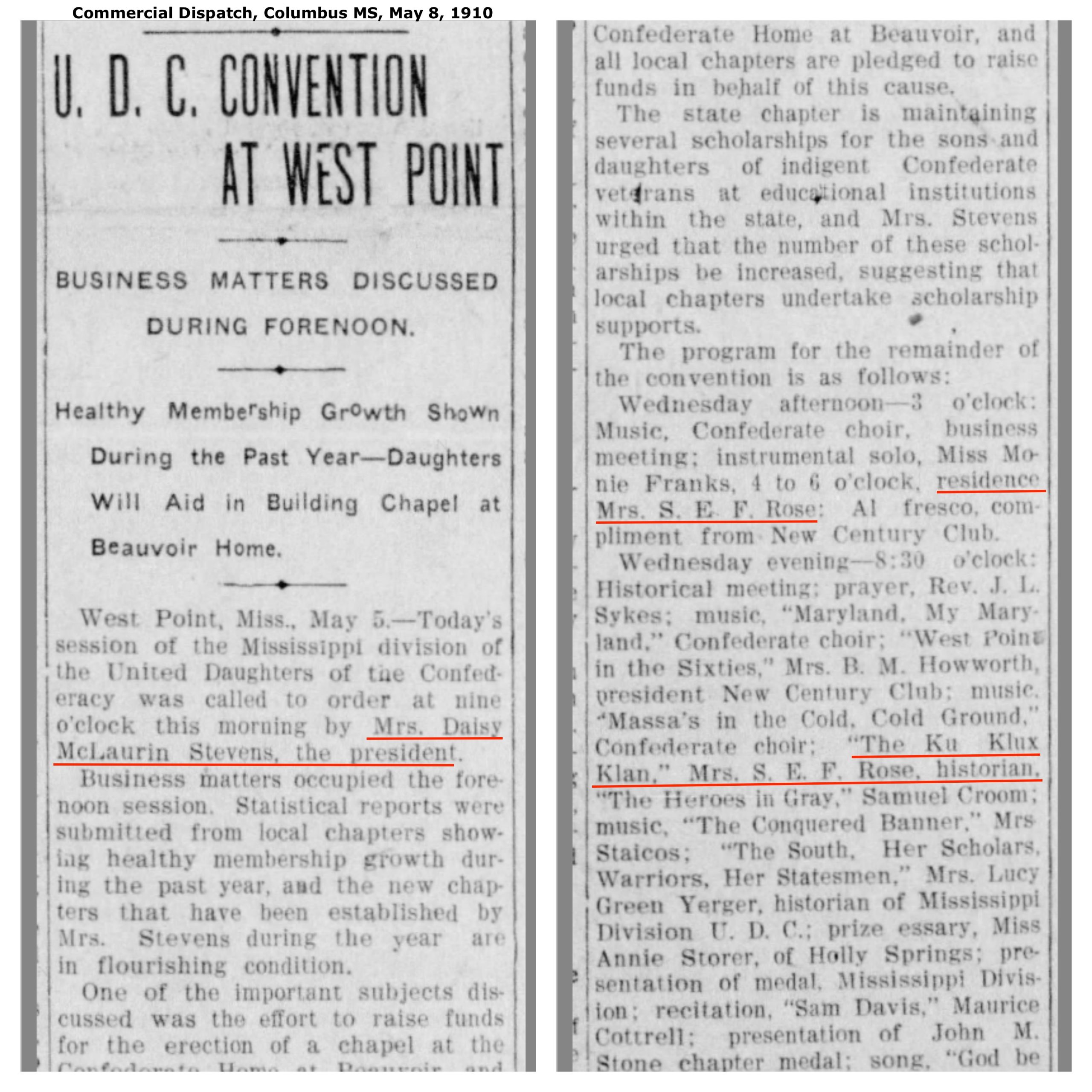 Maybe this isn’t news to many, but it was to me. They praised the KKK at their meetings and in their newsletters, carried a “Ku Klux banner” at the NOLA convention, and so much more. This is just another example, and I’ll stop with this one. This is a two-for-one. Not only do we see the reverence for the Ku Klux Klan and the connection with Daisy Stevens, we also see the advertisement for Mrs. Rose’s pamphlet (turned book) to raise funds for more monuments.

It was at this same convention when the UDC unanimously voted for that KKK propaganda to be taught in schools. I don’t know if it actually made it into schools or not. 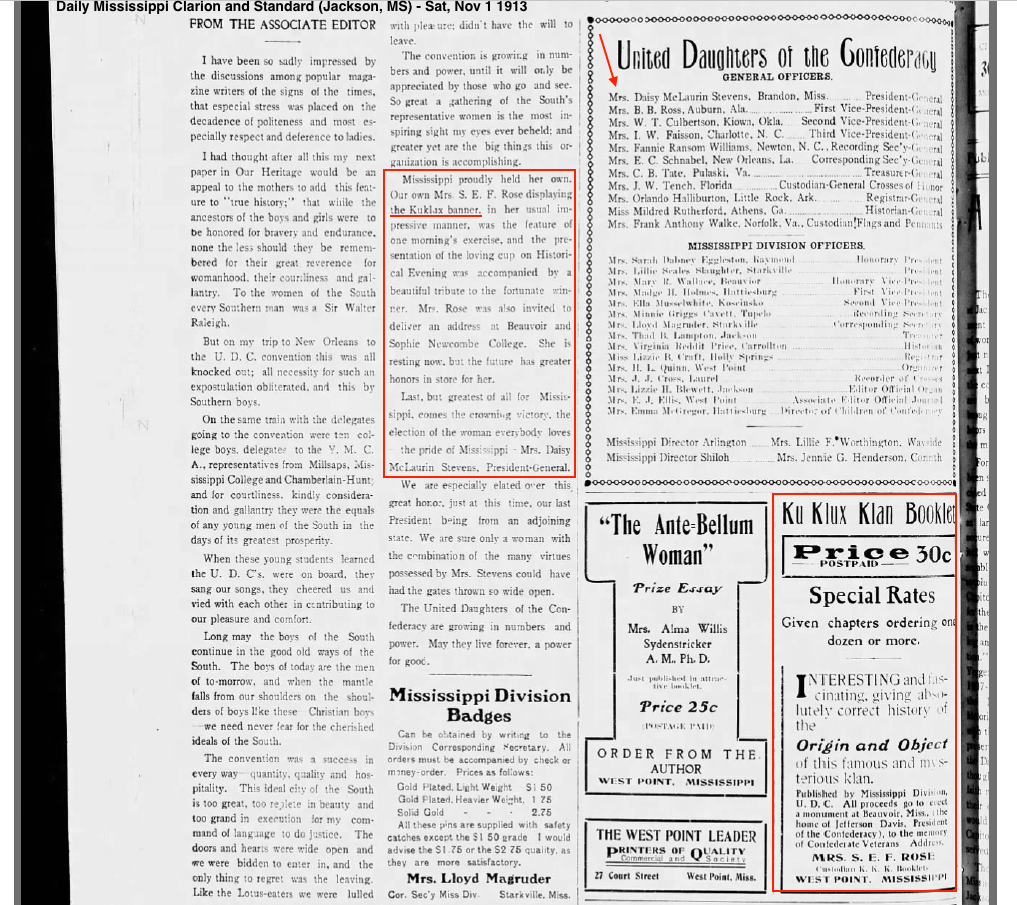 A Brandon woman who was previously in the Brandon Historical Society told me that Daisy Stevens and others “had nothing to do with the KKK.”

You can read the book for free on Google Books. It’s short and brutal. Here are just a few highlights: 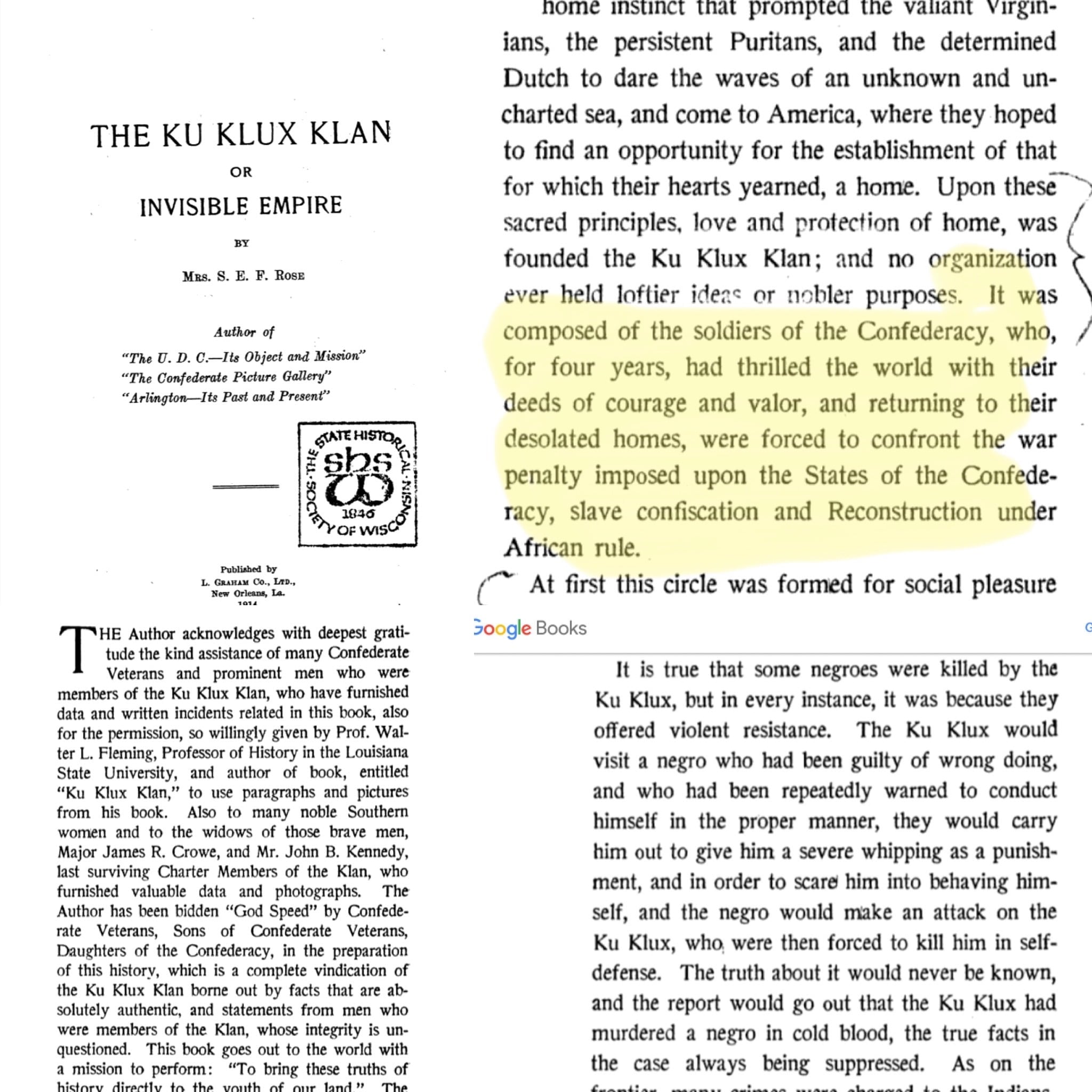 Many of the men who were also part of the statue being raised in Rankin County were former Confederate soldiers. It doesn’t take a huge leap here, and it shouldn’t be too much of a surprise that (likely former) Ku Klux were active in Rankin County politics.

For some reason, we separate the truth of what we know about our racist past from the people that controlled the very laws and foundations of our state. Revering them isn’t the same as revering the Klan…is it?

People can decide that for themselves. For me, it’s about facing reality, and learning from it in a real, active sense.

And we can start by rewriting some of the nonsense in this “City of Brandon” history surrounding the monument, as well as adding in a bit of context. But, one thing at a time.

Enough Is Enough: Relocate the Confederate Statue in Rankin County

“What Goes Up, Must Come Down!”