This area (Sky Lake Rd) was annexed into the Town of Pelahatchie in 2013: 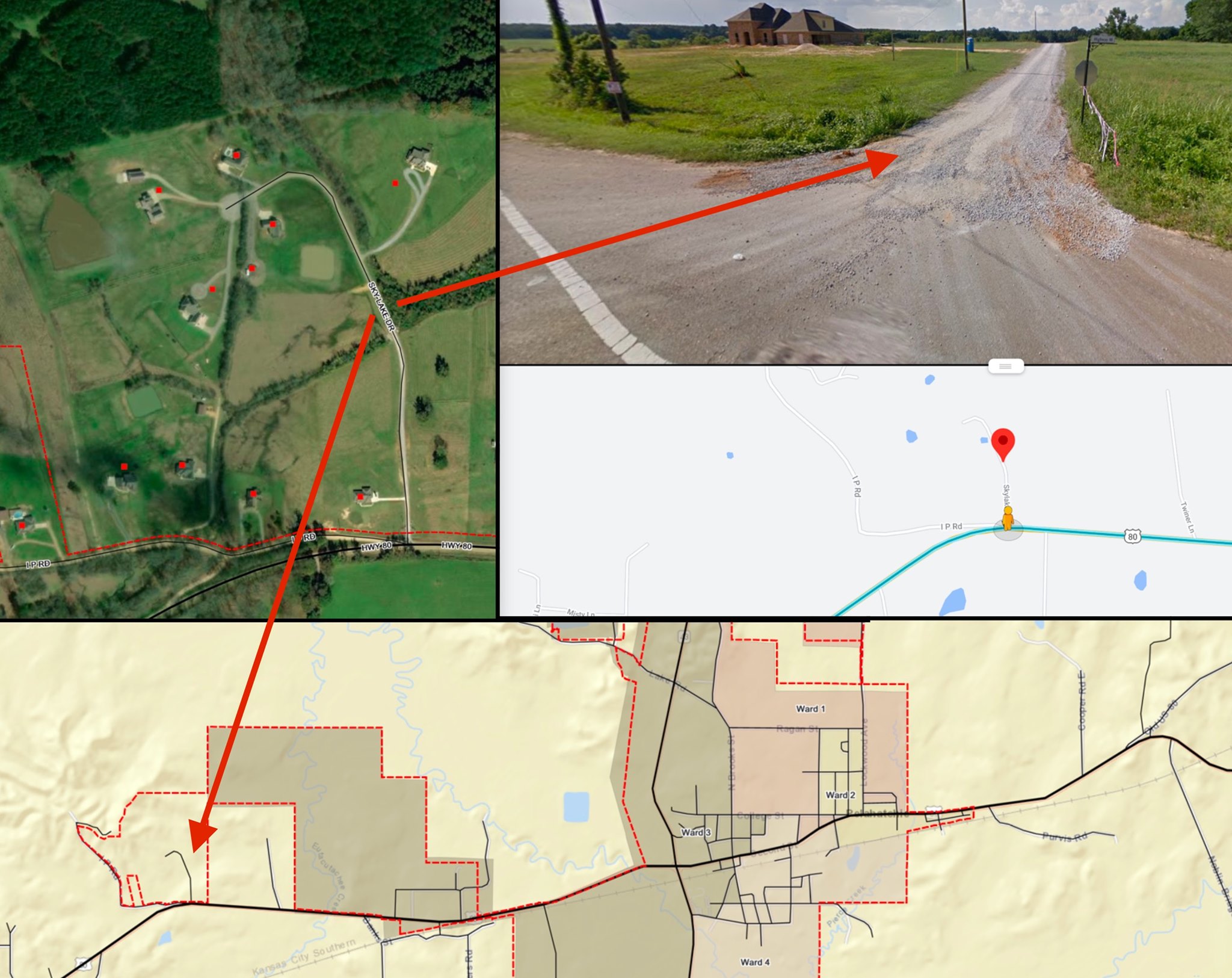 Residents from the Sky Lake Rd, Pelahatchie MS area bring grievances to the Town of Pelahatchie’s meeting on Feb 1, 2021:

These gentlemen are asking that their gravel road be paved or otherwise handled, and they came prepared.

Alderman Michael Adams: “Have you rode around the town of Pelahatchie lately?”

Adams: “And the streets look…” (undistinguishable, but implying that ALL of Pelahatchie has bad streets, so they’re just one out of many)

“I’ll take Pelahatchie over what we have right now. Cause it’s horrible.”

“Last month, I spoke about this.” (I believe this was resident Larry McFarland)

Alderman-at-Large, Eddie Jones: “I didn’t even know that was part of the town, I’ll be honest with you.”

Alderman Michael Adams: “…and anything I say or don’t say ain’t going to be what you guys want to hear. Just like what you want, the whole town of Pelahatchie wants. So if we incorporate you in, which apparently we have, we have to incorporate the whole town in, too. So it won’t be just what you want, it’s going to be what everybody else wants, too. Guess what? Everybody in here is up for re-election this year. Everybody is going to say what you want to hear. I ain’t going to say it. Because I ain’t going to lie to you. Let us look at the whole deal, with the time we’ve got left we might try to do what we can before we all get off the board.”

Further in, the mayor points out that 3 of the alderman in that room were on the board when this part of the area was annexed. Michael Adams, Margie Warren, and Frank Boyd. Below, I’ve included the original ordinance that was approved by the board in 2013.

Margie Warren: “We can’t even pave the streets the streets of Pelahatchie. The county has to help us! So I don’t know how they expect the town to…I thought the county was involved…”

“So why was it annexed, then?”

No answer on that one.

They aren’t receiving any city services, despite paying city taxes. The county picks up their garbage. There are no fire hydrants. No streetlights. The road is gravel, and when it rains, they can barely get to their homes. Mr. McFarland (the one who is speaking when the video starts) also spoke at last month’s town meeting about this issue. This time, other residents joined him, and provided more information.

Later in the meeting, nobody hesitates to approve a payment of $14,000 to an outside attorney who is representing the board in the mayor’s lawsuit against them. Not too broke for that, apparently.

Note especially pages 4 and 5 (or the first two pages of the actual ordinance), where it lists the services that the Town of Pelahatchie will provide. It also shows who was on the board at the time:

I’ll update this post if any more information comes up that is relevant. I came across this filing while perusing through other court documents and filings, so that was a fun somewhat accidental discovery.

Video from board meeting was recorded by me personally, and is owned by me.